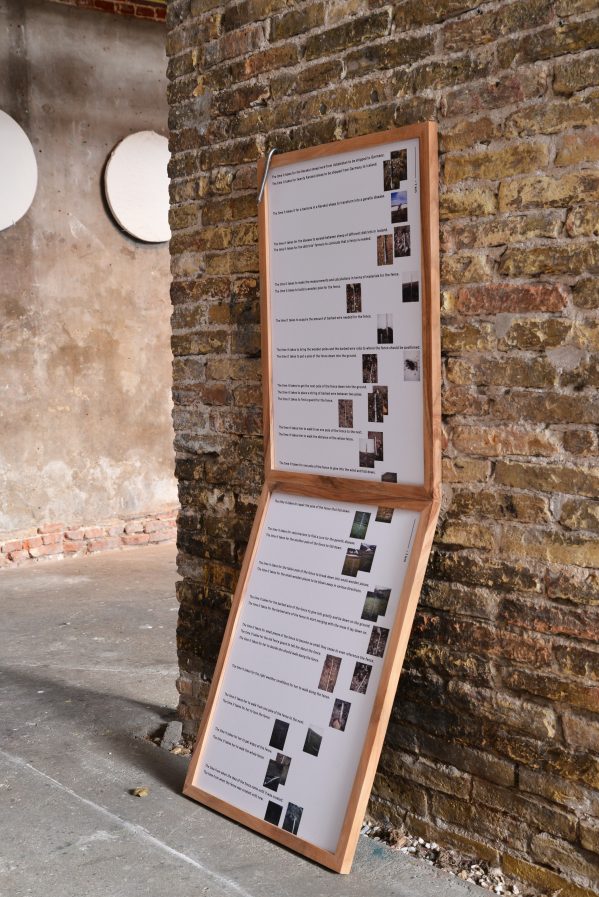 Agnes Winter: Could you tell something about yourself and why you wanted to become an artist?

Halla Einarsdottir: I am Halla Einarsdottir and I’m from Reykjavík in Iceland. After high school I started playing around with photography for myself and taking some night courses in drawing and photography. I really enjoyed it and got curious about different ways of thinking and observing. I don’t know, it just felt very natural as soon as I started with these experiments and I wanted to continue and learn more.

AW: You graduated from the Gerrit Rietveld Academie, Amsterdam this year in the Graphic Design department. Can you tell us about how your work developed during your studies?

HE: Yeah, I really developed a lot, since I had hardly done any art education before. I did one year of photography and early on during that year I discovered that I enjoyed working in different mediums and not limiting myself to just one. So I switched to graphic design, which was great, because it’s really free at the Rietveld and quite autonomous, but still structured. So you learn a lot of different techniques, methods and modes of working. As the course develops you also get more time to do research and you find your own interests, especially during the process of writing the thesis.

AW: What themes or subjects did you research?

HE: Early on, I was really interested in the visual language of the educational system or educational books, like how to learn languages and stuff like that. From there, I got more interested in narration and how stories can influence a work. I think both these subjects are still present in my work. But then I also explored my early interest in nostalgic objects and somehow holding on to them and putting them on a high pedestal. I had been struggling with that a lot and I kept choosing weird objects to make a whole project about. I had to really dig into that subject, because I had to understand why I was so fascinated by it. So I ended up writing my thesis about broken objects and this became quite an influence in my work.

AW: What is it about broken objects that fascinates you?

HE: Oh, it’s quite a lot that interests me about them. I think they are super powerful. The reason why you fix them or you never fix them. I think it’s this limbo that’s interesting, of forcing yourself to still use it or never using it, but keeping it. It’s this ambiguity that they hold that excites me.

AW: Can you elaborate on what your thesis was about?

HE: It was about this subject – object relation, but specifically about broken, or half broken, objects. It included ten short stories about both historical and more contemporary objects, some were completely fictional and others were kind of dry product descriptions. One of them was about a bent tent peg, which has followed me for quite some time. But through these stories, placing objects in different settings and narratives, I discovered the dialogical power of these objects, how they talk back to us and how we listen. I guess this narrative power of the objects was also one of the conclusions in my thesis. But it was also a study of materiality in a physical sense, which I hadn’t done so much before.

AW: For your graduation you made the work Sauðfjárveikivarnargirðing (2016), which is an installation about the walk you made along an old fence in Iceland. Can you tell a bit more about this work?

HE: Yes, it was based on this broken down fence in the countryside of Iceland. I got to know about the fence through the artist, Hreinn Friðfinnsson, whom I assist. He used to guard the fence and therefore walk by it every other day, even though its length is around 50 kilometers. I had heard a lot about the fence through him and about the area around it, and I was curious about the condition of the fence. Because no one ever really sees the fence, as it’s so remote. So I walked by the fence in one day and I had no intention of doing a work about it, though I still documented the fence during the walk. I was also just curious to see if I could physically do it. After the walk I got even more fascinated with the fence and specifically with its barbed wire, it stayed on my mind somehow. As soon as I started to write about this journey and about my experience with barbed wire, doing research and collecting stories, I felt that the work I wanted to make needed a physical appearance. Of course in graphic design a lot of people graduate with a publication or a series of posters. Maybe it’s the way I work in general, I have a tendency to add three-dimensional elements to two-dimensional works. So I ended up remaking this installation they have at the Kansas Museum of Barbed Wire (La Crosse, Kansas, USA) and I used my texts, drawings and sculptures of blown up leftovers of the fence within that display system.

AW: How did the fence spark your interest in barbed wire?

HE: Well, the fence consists of barbed wire and wood, and I struggled with this quite a lot. Because barbed wire has these harsh, cruel connotations and the scenery I documented and photographed during my walk was quite romantic. I mean, the story of the fence is really not that brutal at all. And in the end, I saw some beauty in the fence, even though it was so broken down and rotten. During a talk I had with my teacher Edward Clydesdale Thomson, we came to the conclusion that, even though a fence often has cruel connotations, the story of a fence is that it eventually does brake down or gets broken down, although it can often take too long. So it’s actually a very optimistic way of seeing a fence, maybe even too much so.

AW: Walking seems to be a recurring theme in your work, in Sauðfjárveikivarnargirðing, but also in your earlier work A Blurry Berlin (2015). In this video you describe how you encountered Berlin in a walk without your glasses on. Why is walking important in your work?

HE: I think it works well for me, the way you think during specific types of walks. For example if you’re in a supermarket or on a hike, your mind operates in such different ways. I think these different ways trigger curiosity or thoughts that can create a work in the end. I would really like to continue walking a bit more for my work.

AW: So walking as a means of thinking or researching?

HE: Yes, definitely, I think both in different ways. Sometimes it works as an unconscious trigger and sometimes I use it more intentionally, for instance in A Blurry Berlin, where I went for walks for each part of the work.

AW: What does it mean for you to be nominated for the Sybren Hellinga Kunstprijs?

HE: I was super honored, actually. Also, coming from the graphic design department, it’s really motivating. It gave me confirmation that I can also do work autonomously and should continue to do so.